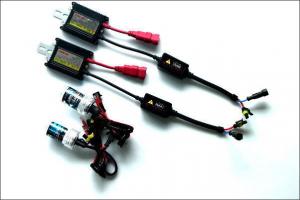 HID Xenon Light Source
HID is the newest and most effective technology in lighting systems. With HID lights, you get greater output, while using less engery. The light emitted from a HID light is whiter, brighter and lighter than traditional spotlights. This give the user better clarity and vision each time, every time. The lights are a safer choice for long distance drivers, causing less fatigue and strain on the eyes.
Because the lights do not use a filament, they are less prone to damage caused by vibration and excess heat. They have a longer lifespan ... up to 3,000 hours compared to an average of 900 hours of most standard halogen lights.
Lighting from an hid kit is up to 10 times more durable than a halogen lighting system since road vibrations can cause damage to a halogen filament, but there is nothing to break inside an HID bulb. Instead of using a filament as it's source of light output, an hid bulb generates a xenon arc that jumps between two diodes to emit its light output. This electrical arc is similar to the lighting in the sky, so in a since, hid xenon bulbs are what you might call "lightning in a bottle!" Pretty cool huh?!! These light sources also produce a white to blue-white light in the 4300K to 6000K color range that is safer due to the fact that it is closer to the color of natural daylight.
The color temperature of daylight is close to 4300K, which is why we as human beings that see best during the daylight are able to see more vividly with a 4300K hid kit compared to 2300K from halogen bulbs. The light output from a 35W 4300K HID Xenon lamp is about 300% more visible light than a 55W halogen bulb. The xenon hid kit will also consume much less power from your vehicles electrical system and generate much less heat during operation.

Thank you! Your message has been sent to the following suppliers.